I made a reading log, and you can too 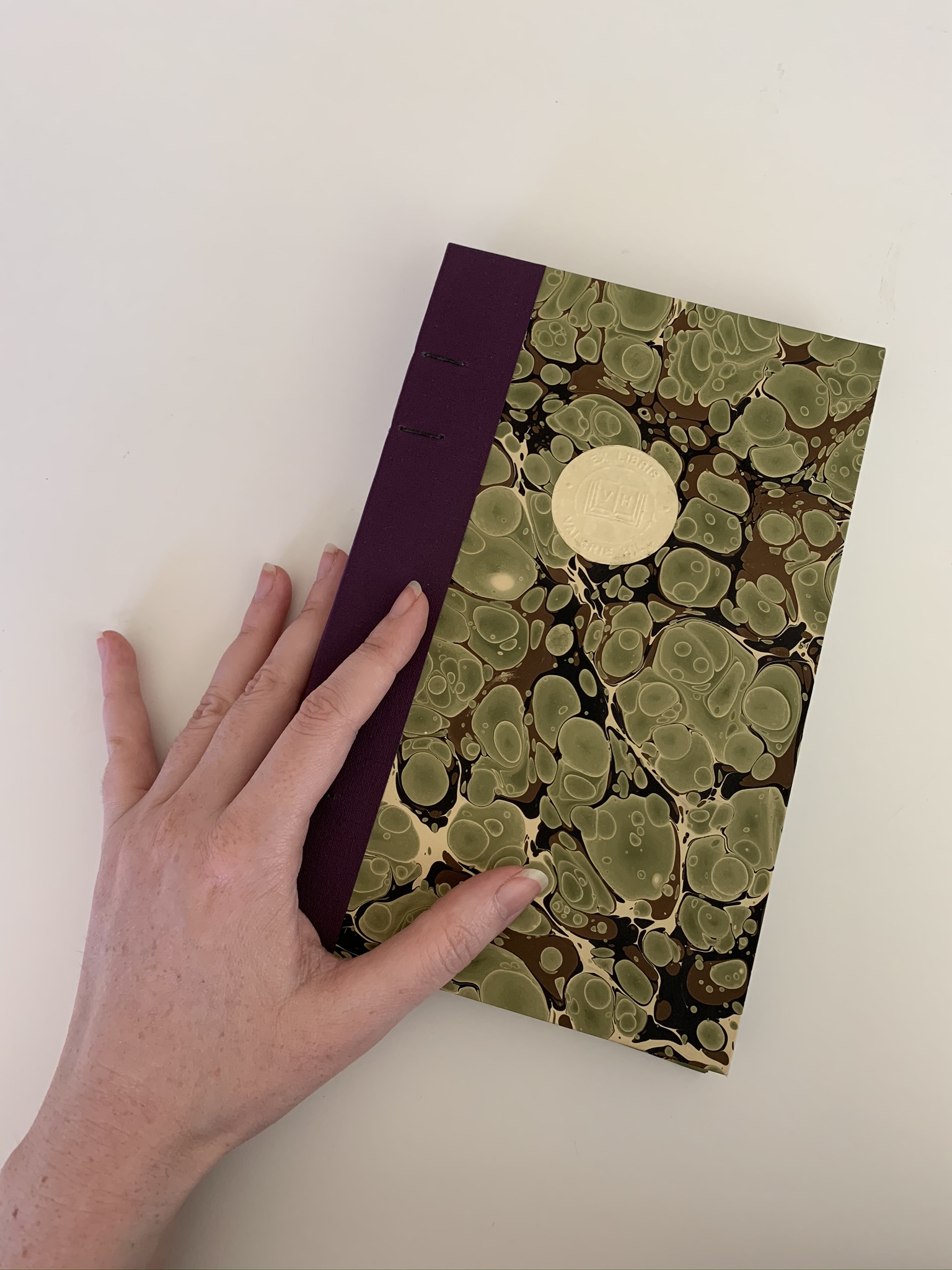 Time to see what kind of book I’ve made. 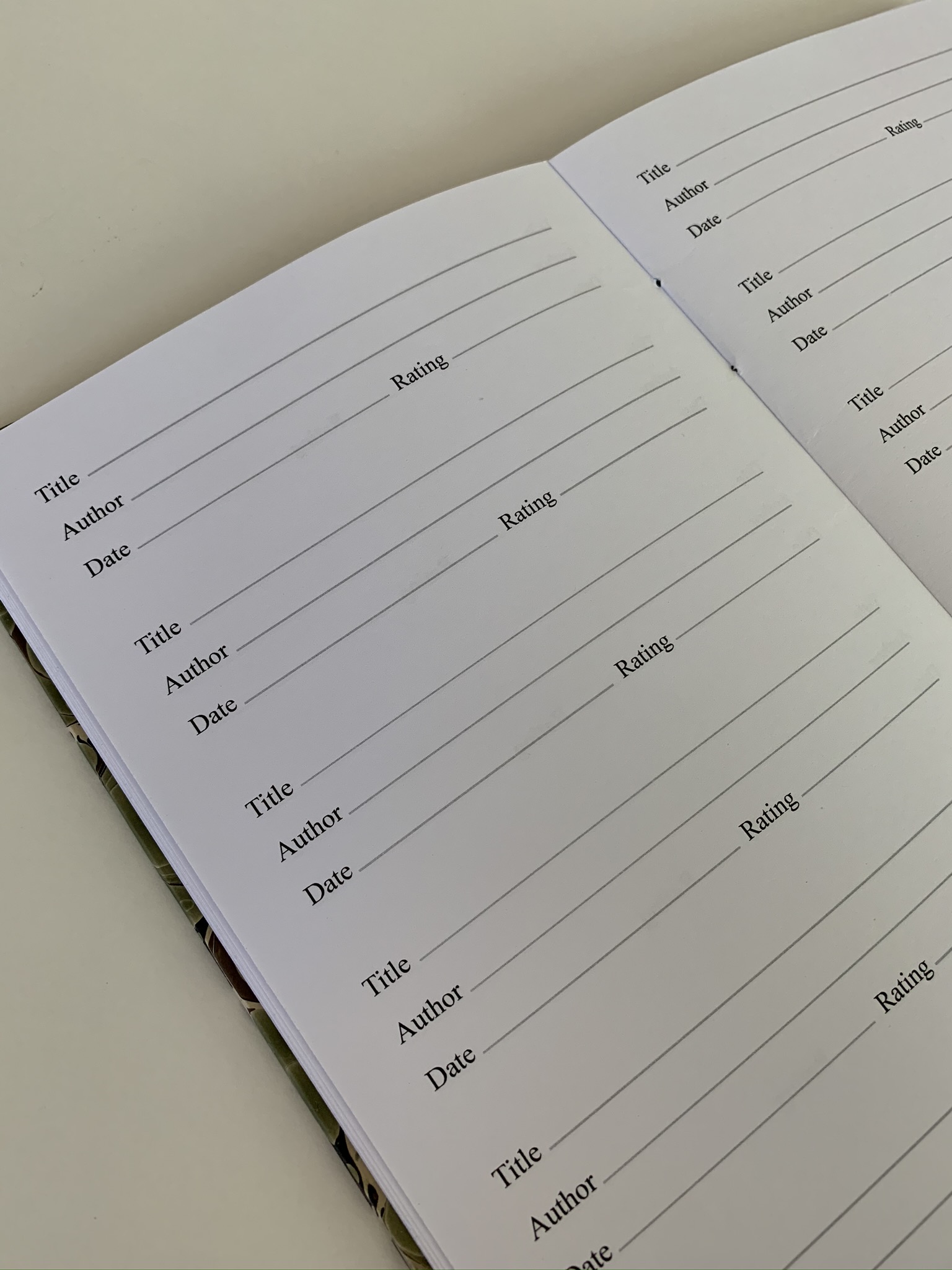 When I finish a book I like to record the title, author, the date that I finished it, and my rating. This helps me to keep track of what I’ve read when, and if perhaps I’m remembering a book being better or worse that I had found it to be upon first completion. It also gives a nice feeling of accomplishment to get to write down another book finished. 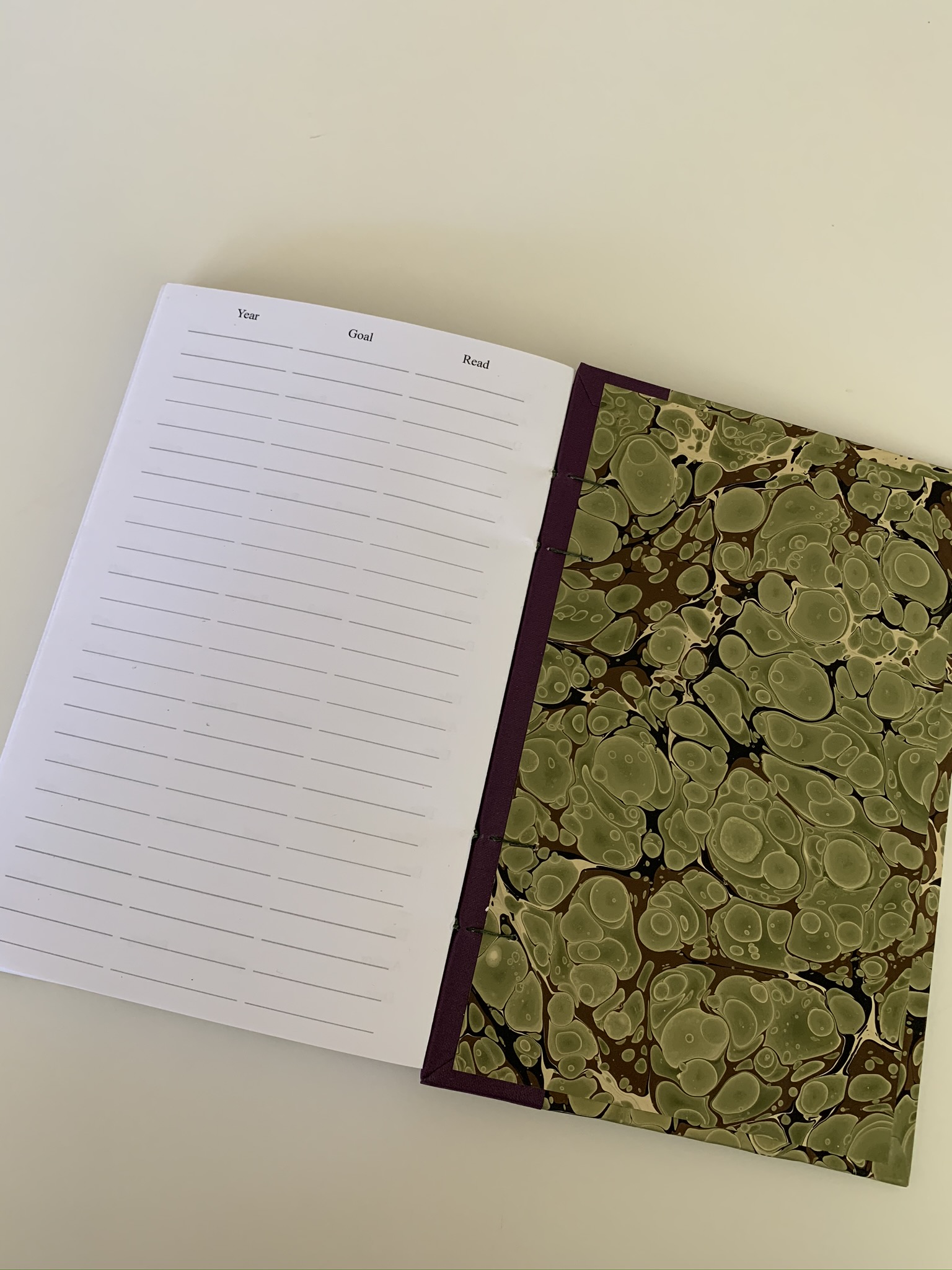 I made the last page an annual reading goal log. I can record the year, what my reading goal was, and how many books I managed to complete. 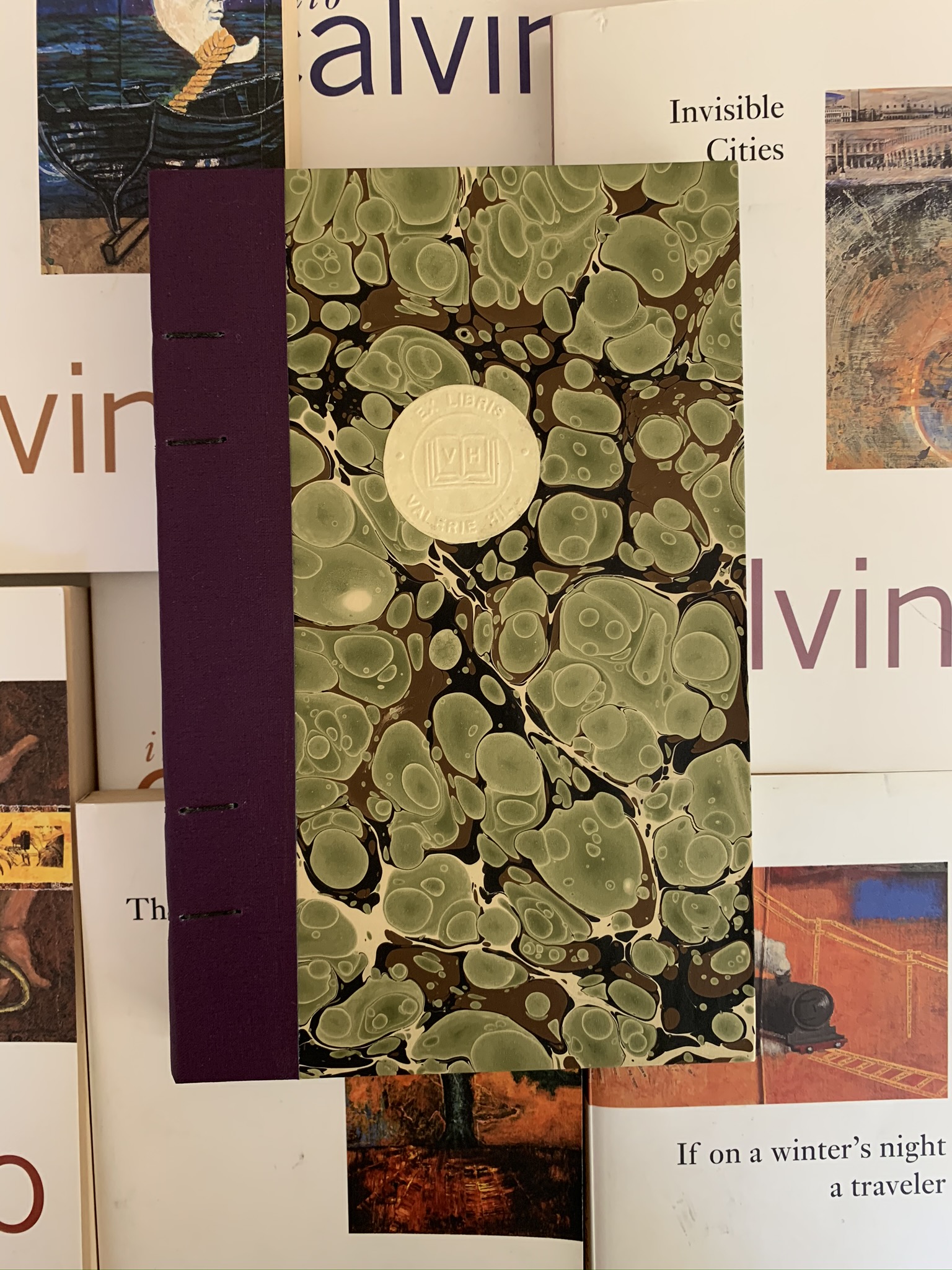 A good book has a strong spine 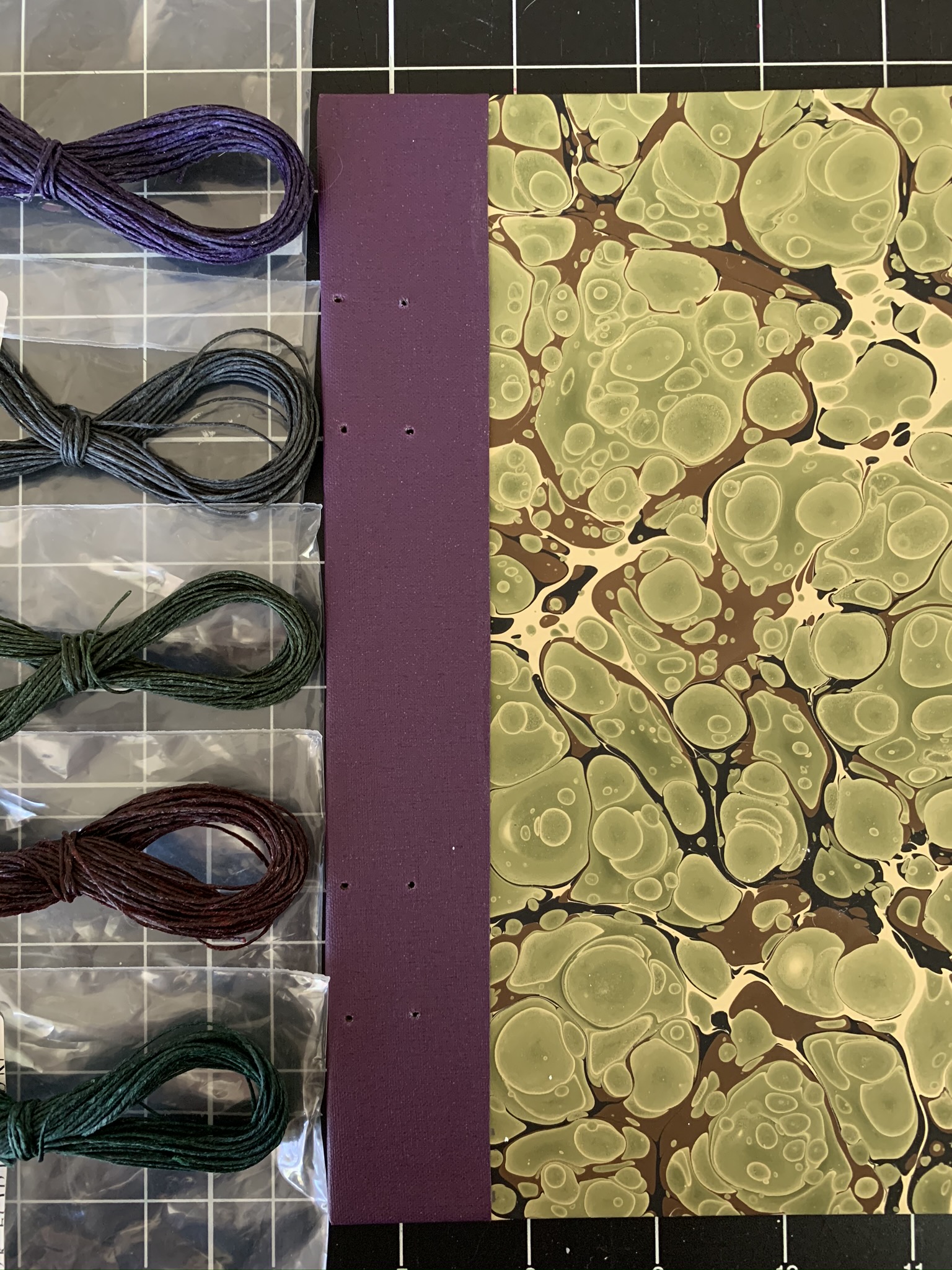 One final design decision to make before I can begin binding – what color thread to use on the spine. 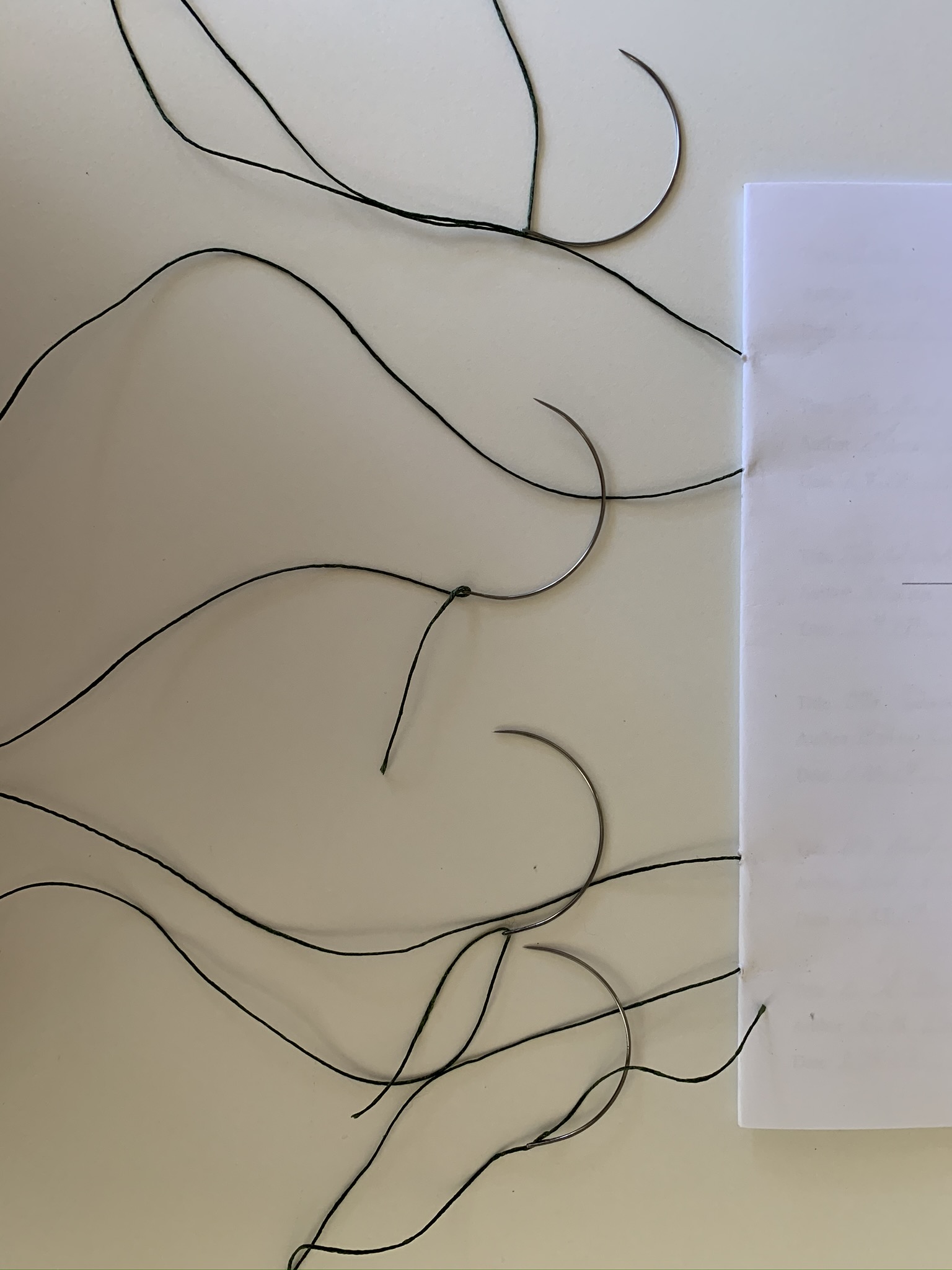 With thread selected, I can begin the sewing. For a Coptic binding you use this style of curved needles. It can feel like you’re working with fish hooks! 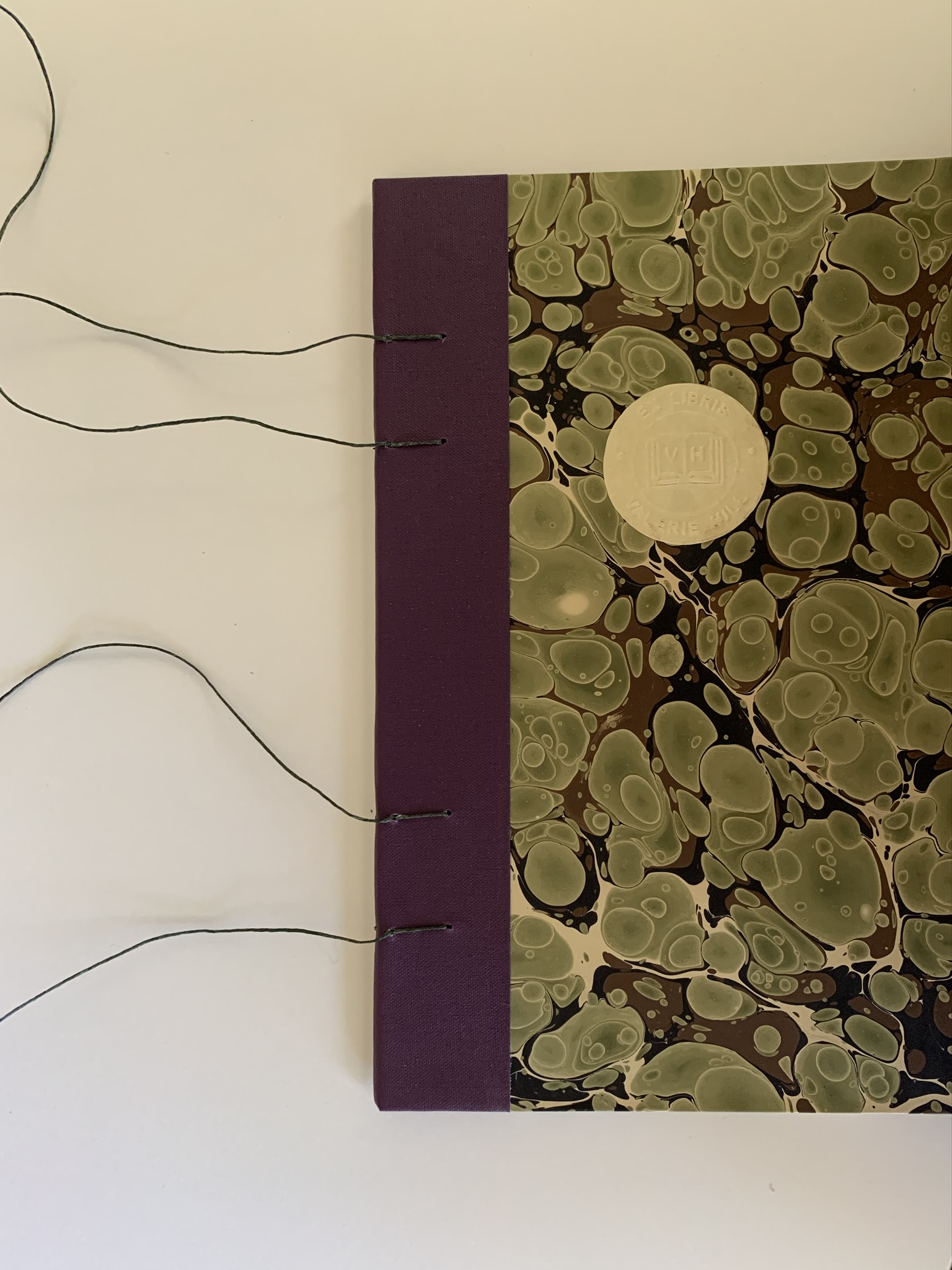 I begin by sewing the first signature onto the cover. Here you can see where I have sewn through those pre-punched holes. 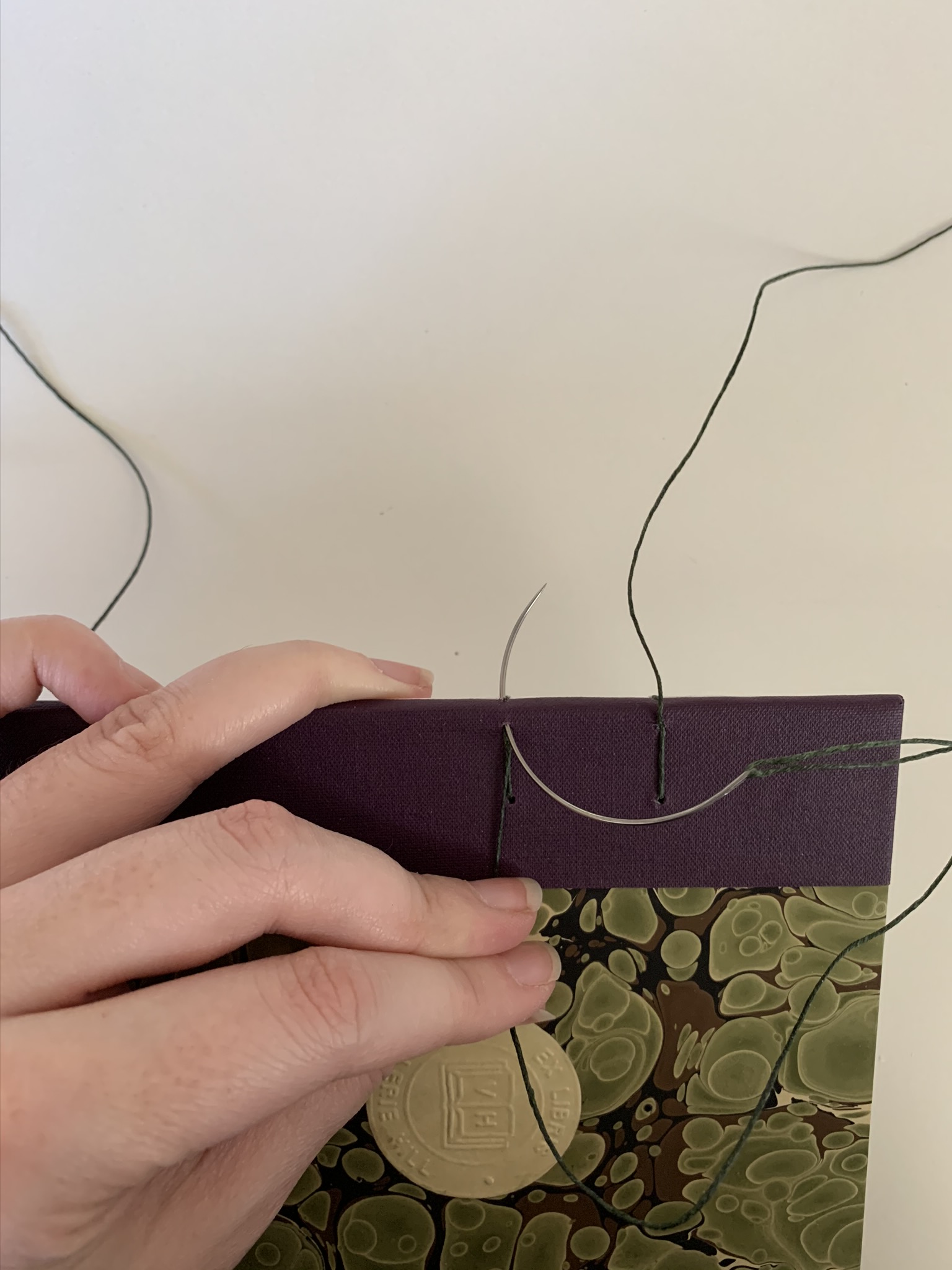 With this style of binding one of the sets of holes is angled to come out on the edge of board. It always feels like it’s not going to work out, but somehow it does. 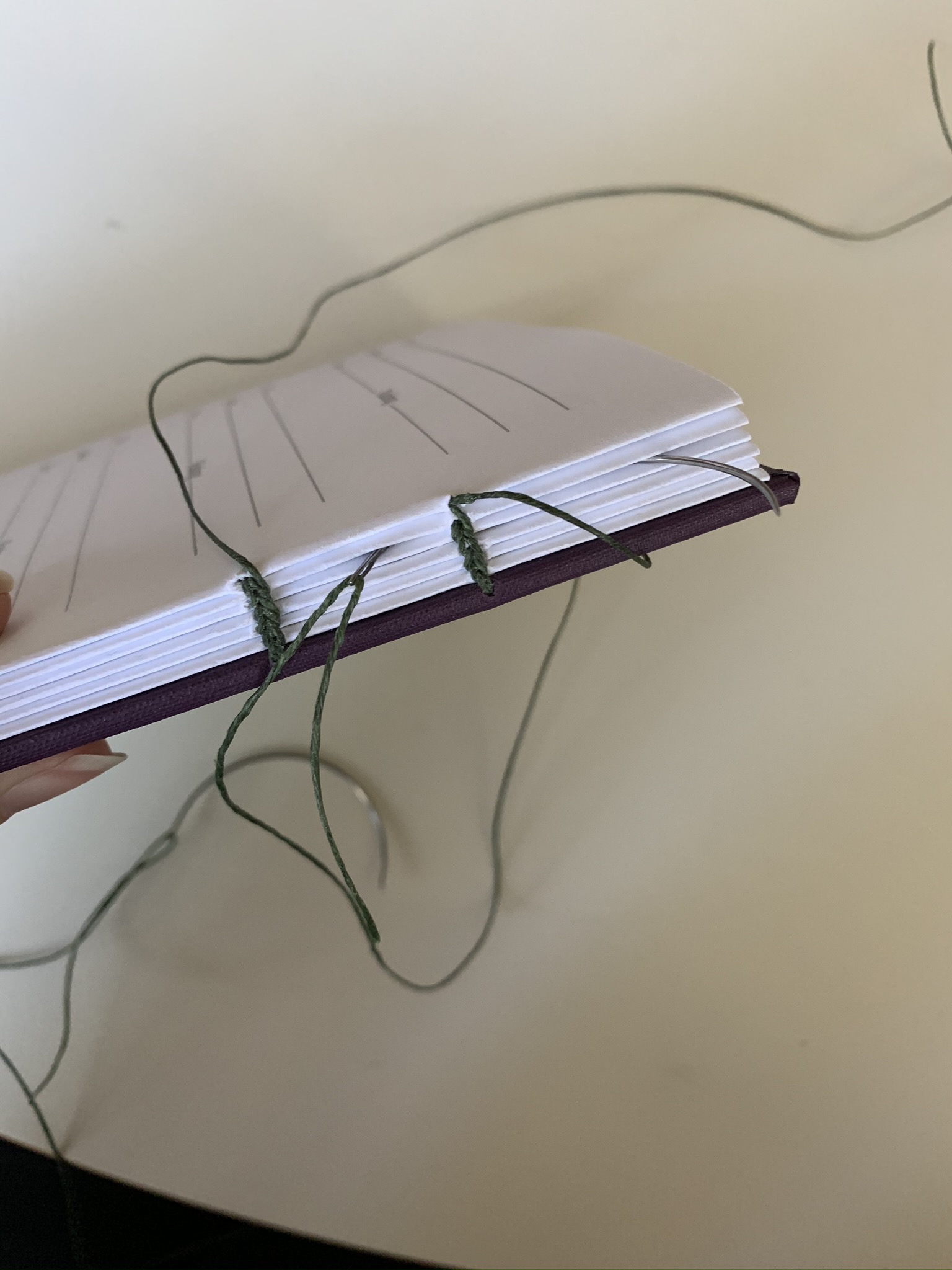 This is why you need the curved needles. Part of the binding process is taking the needle and swooping it behind the set of stitches on the signature below. This is what ends up creating the stacked chain look of the stitching along the spine. 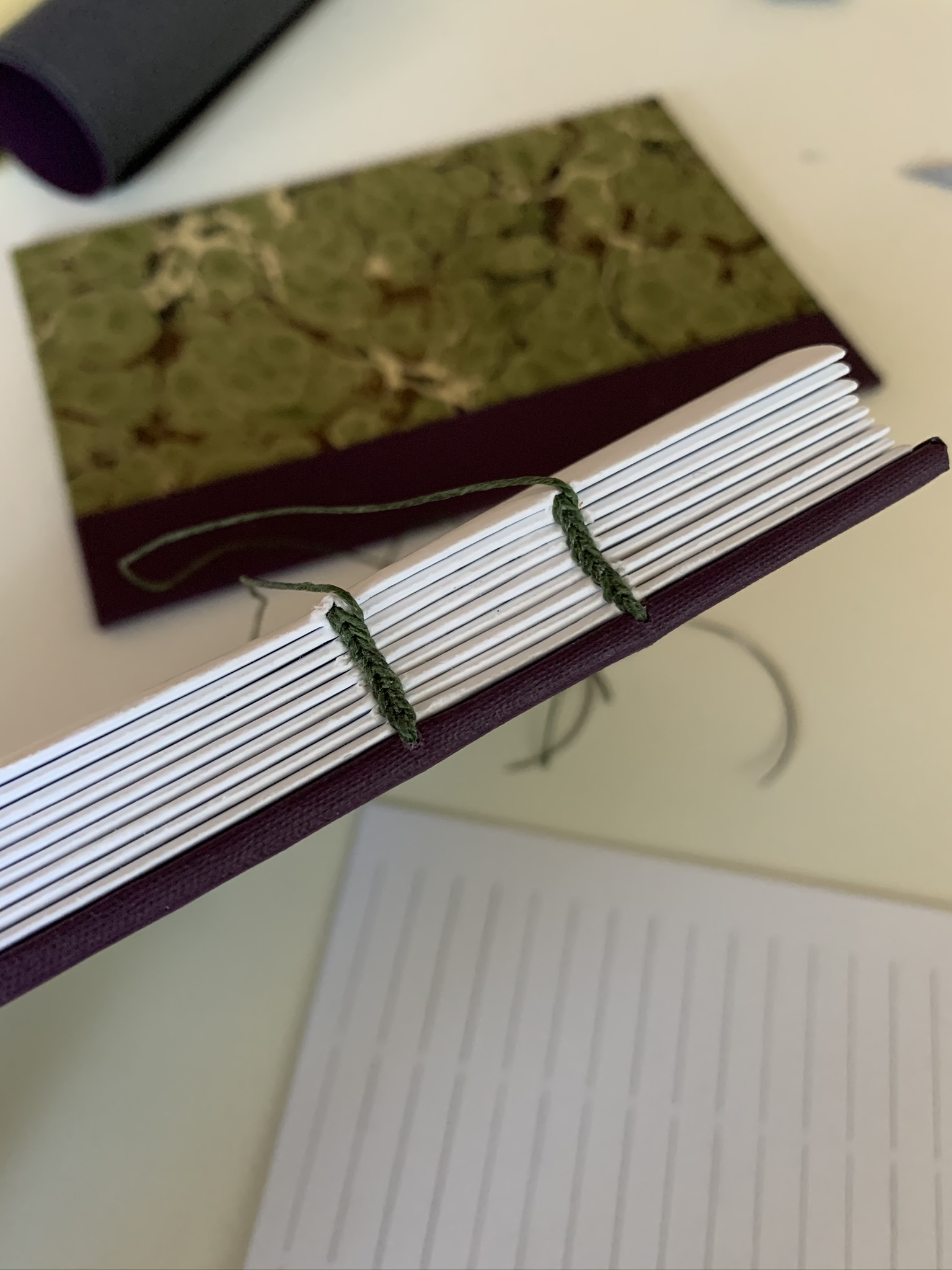 Nearly done sewing in all the signatures. In theory, you could sew in an endless amount, but I tend to like around ten. 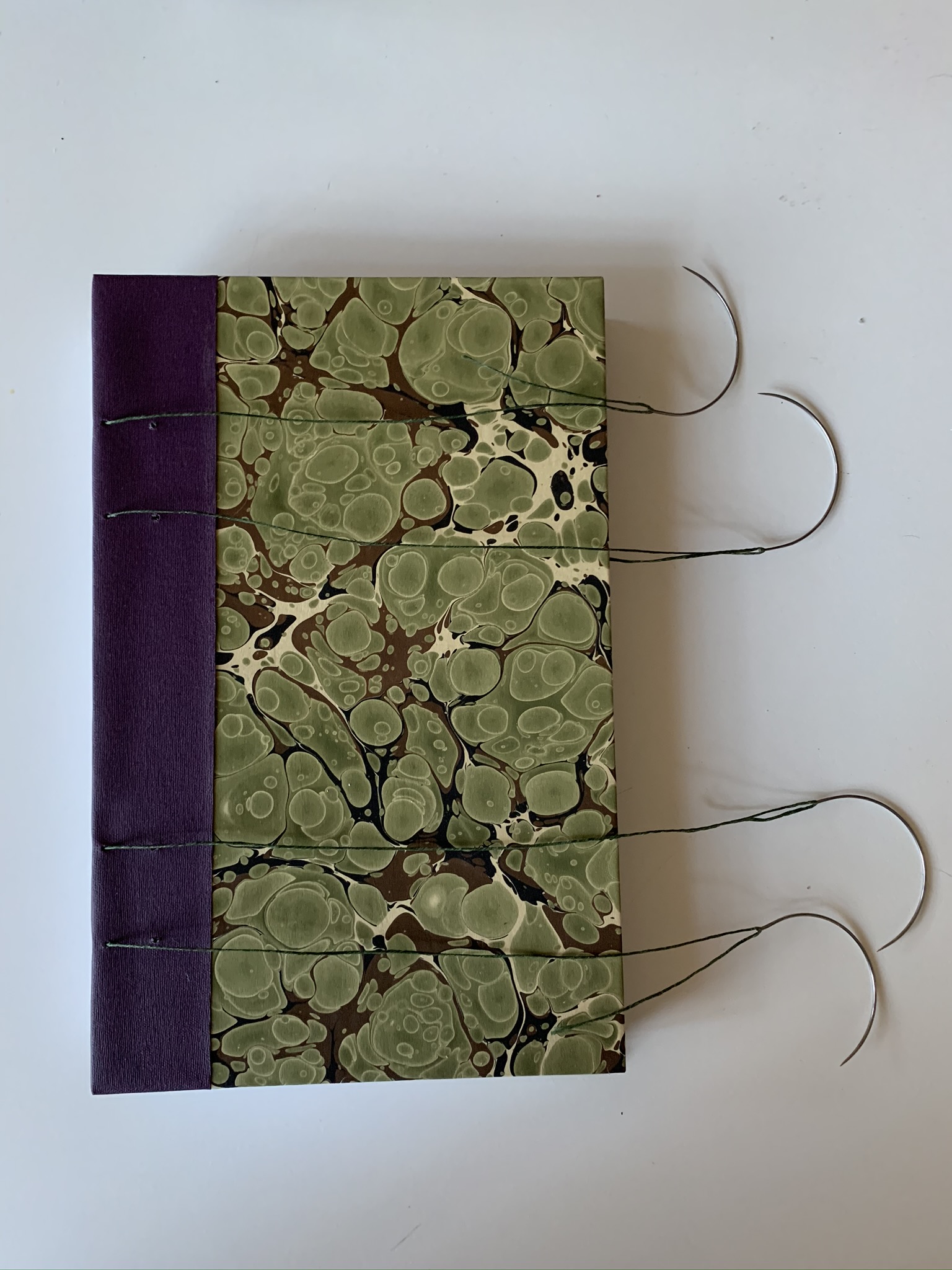 It’s important to keep your threads neat and organized as you go. 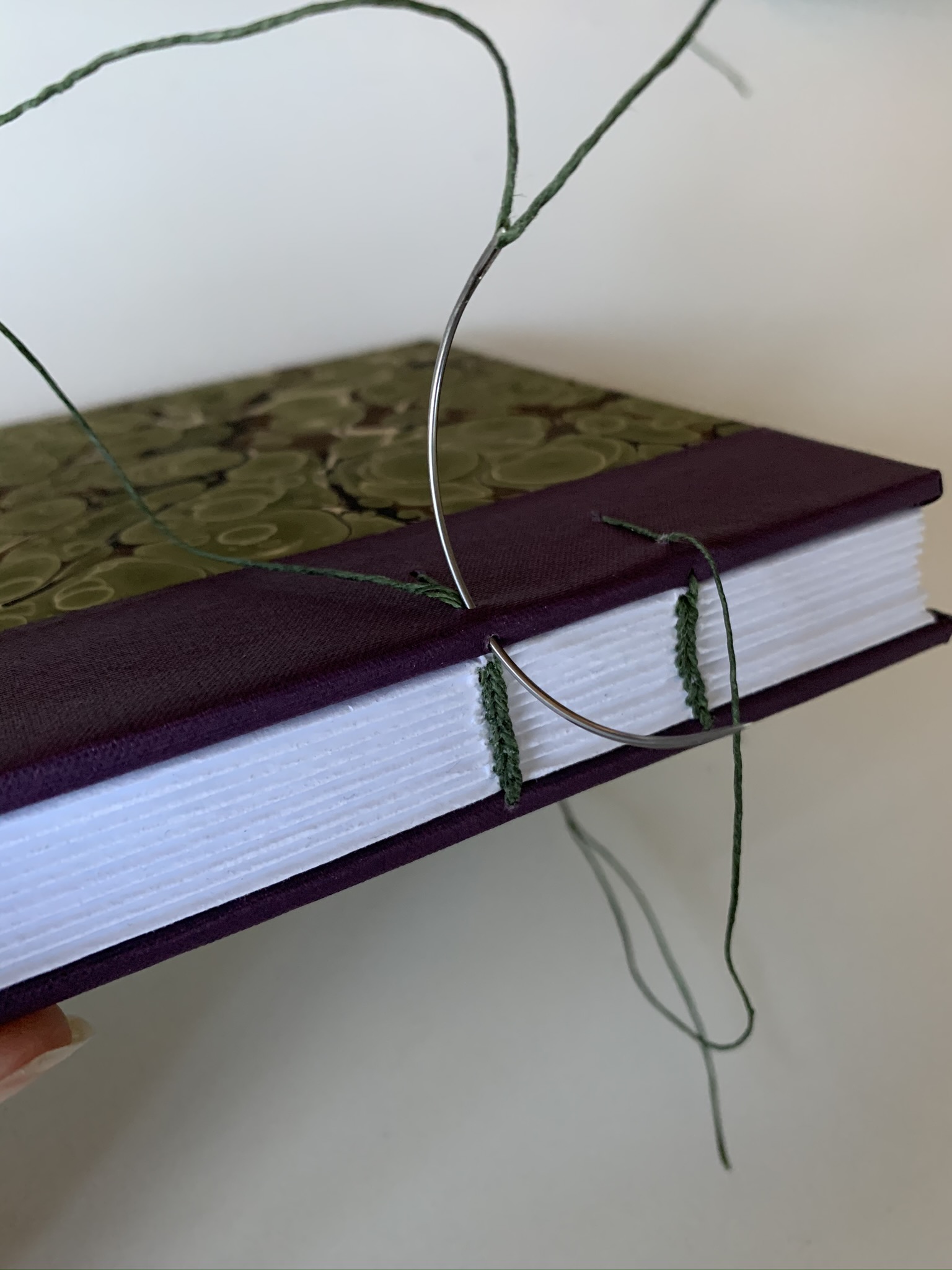 Attaching the back cover. 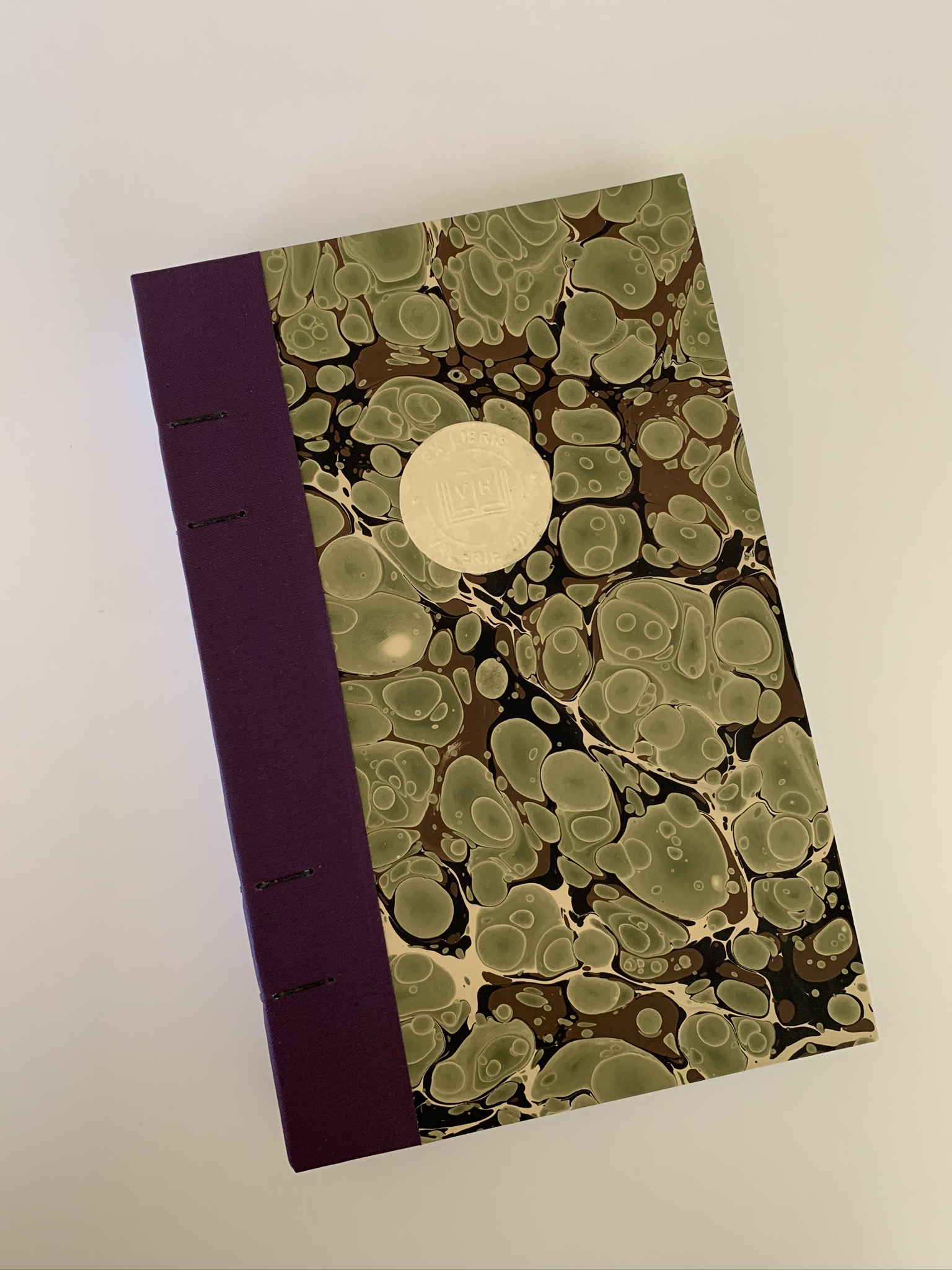 And just like that, your pile of papers and boards have suddenly become a book! 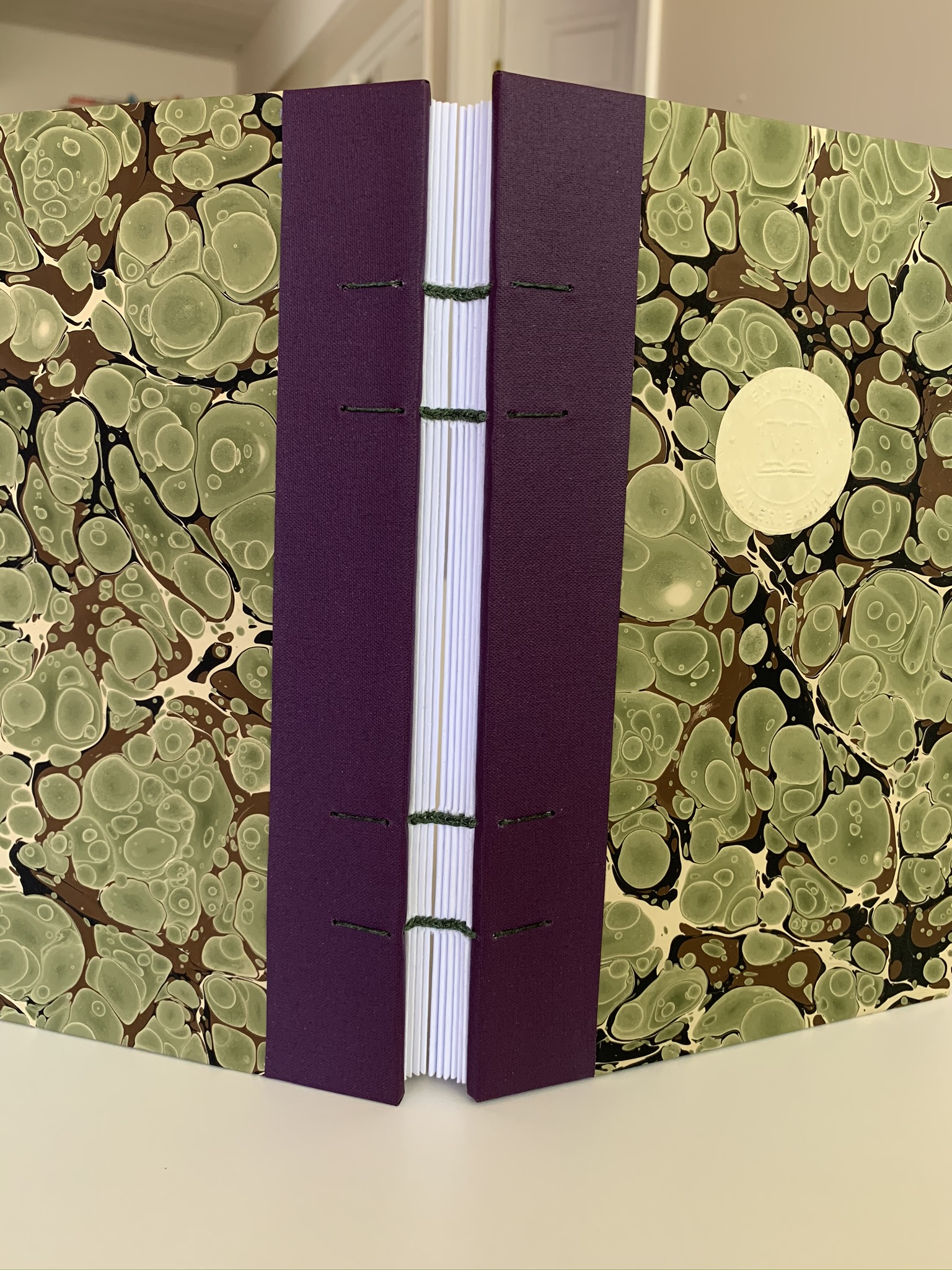 I always enjoy this style of binding project because it comes together so quickly once it gets going. There are a ton of instructional videos and guides online that can take you through the process in detail. The first time might be a little challenging, but once you’ve finished your first book you’ll be able to replicate it with ease. Why not give it a try!

In the world of vintage ephemera, Victorian Valentine’s Day cards are some of the most beautiful. When I began to pull inspiration for the tarot card images, I knew it had to come from these charming cards.

When making a book, begin with the cover 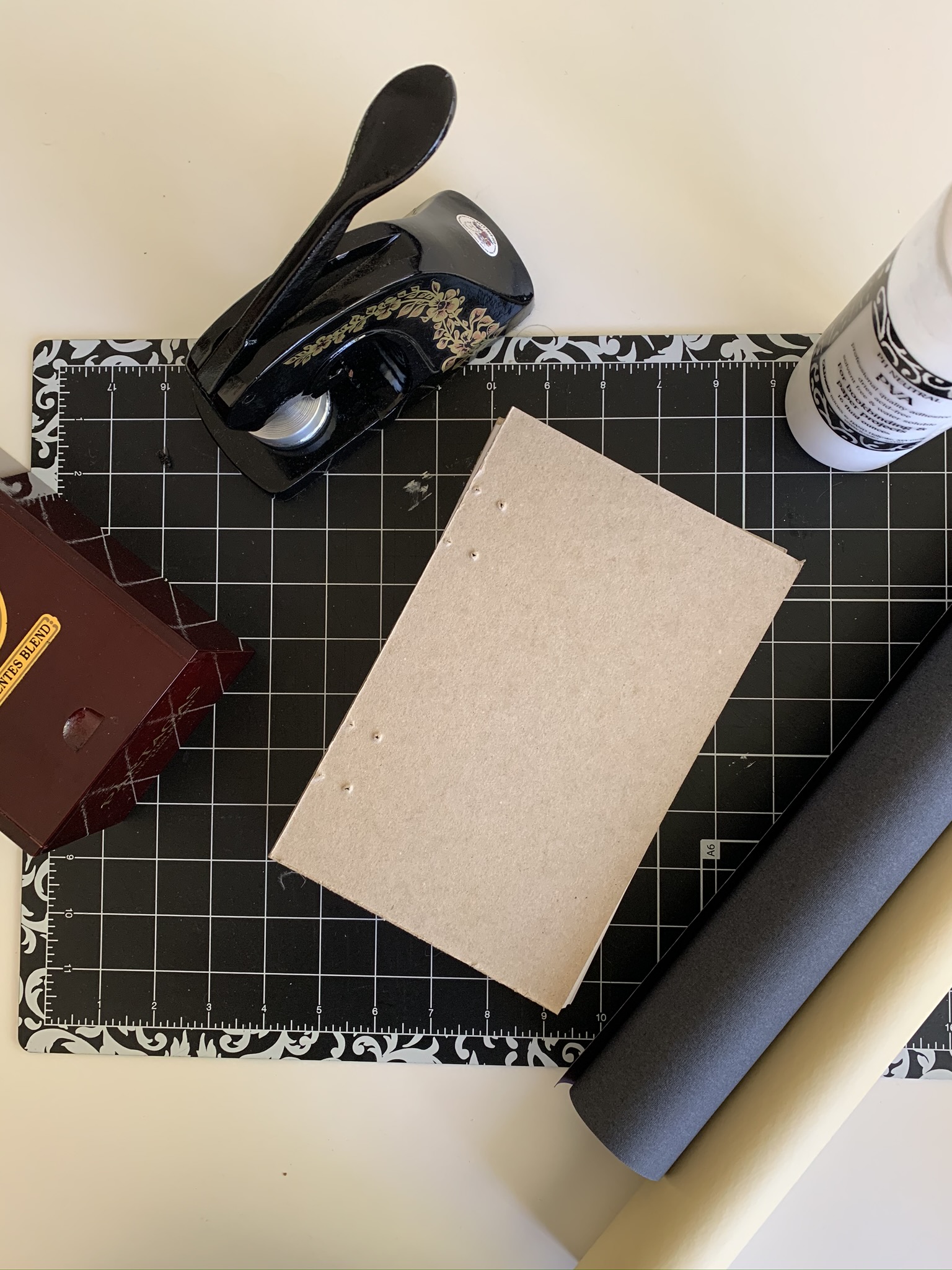 Today I am making myself a new notebook. With this style of binding you begin by covering the boards that will be your book’s covers. I’m re-purposing some book boards that had previously been bound into an example book and were left bare, which is why you can see there are already holes pierced through for the thread. Normally that would come after they were finished being covered. This will pose a slight challenge, but I enjoy making good use of supplies I already have on hand. 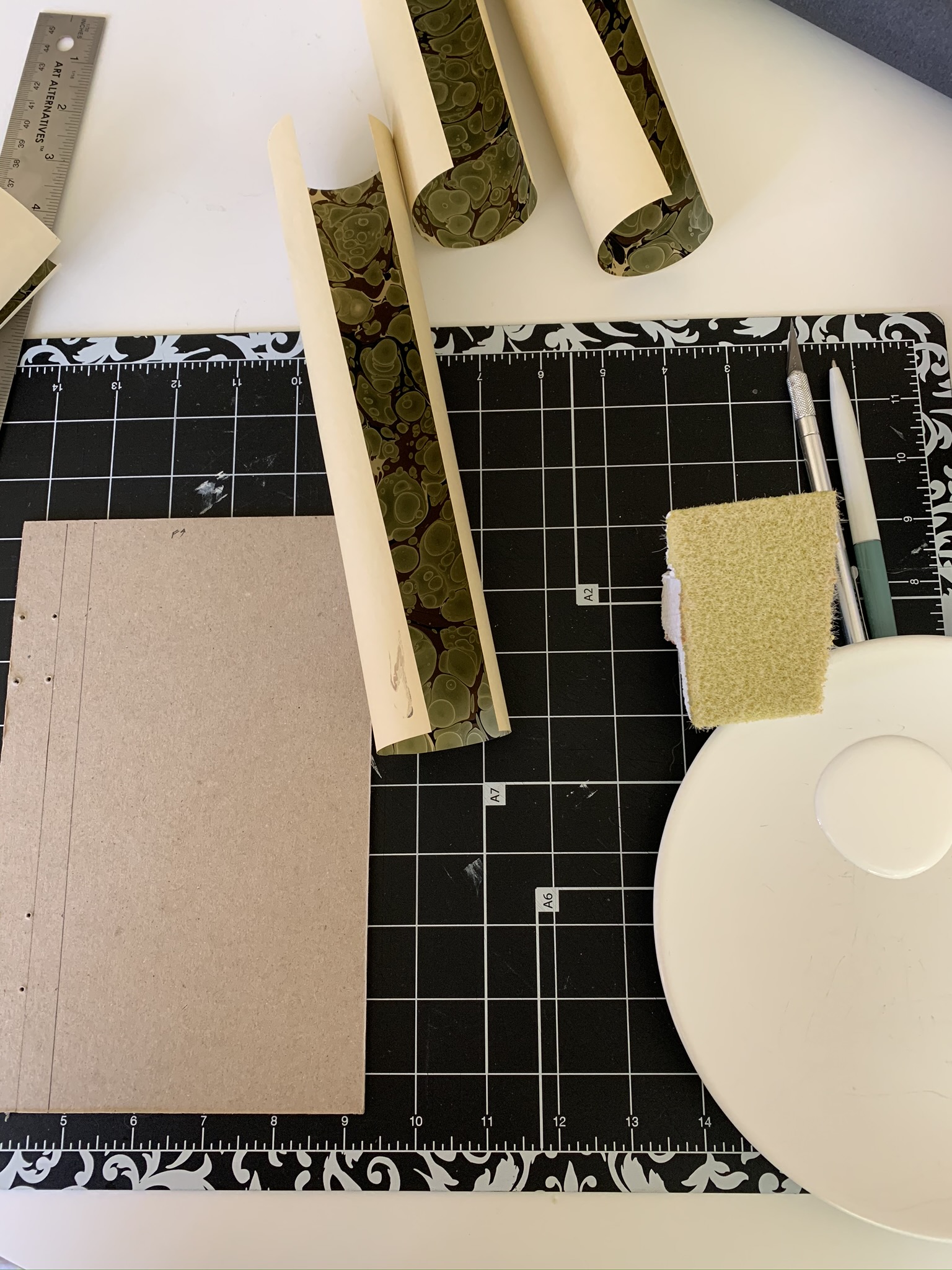 Here I have cut my decorative paper to size and am preparing to glue it to the board. One of the challenges in working with PVA glue is that it can dry very quickly, some times too quickly to spread it evenly over a large surface like this one. The fuzzy sponge thing resting on the corner of my glue plate has been a complete game changer. They are sold at paint stores for spreading sample paint on walls without a brush. Normally they are much wider, but mine has been cut down for a more reasonable size. It allows me to spread the glue over the entire surface of my board or paper in moments. I can’t recommend trying it enough! 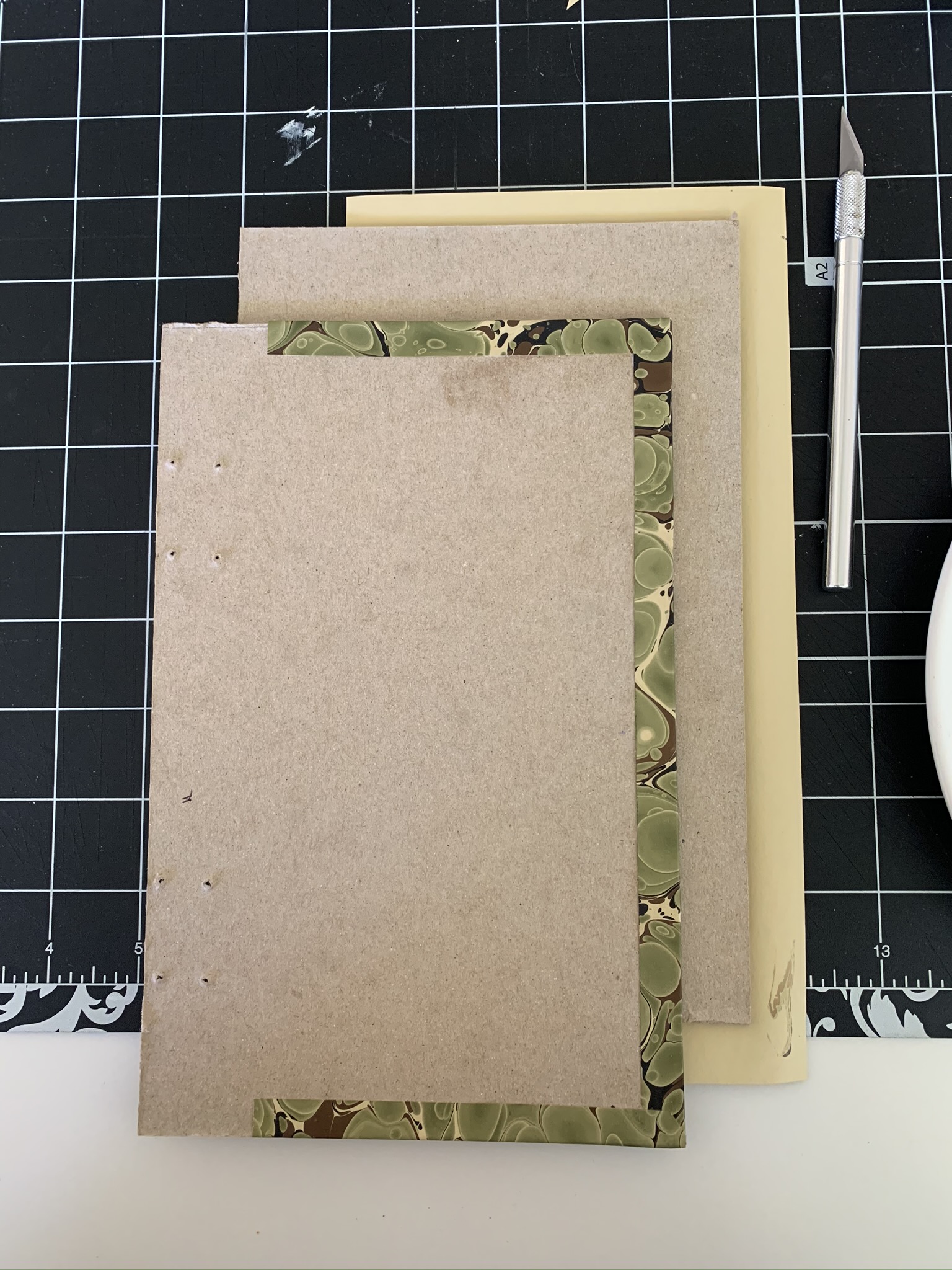 With the decorative paper on the front cover, now I have to repeat it on the back. 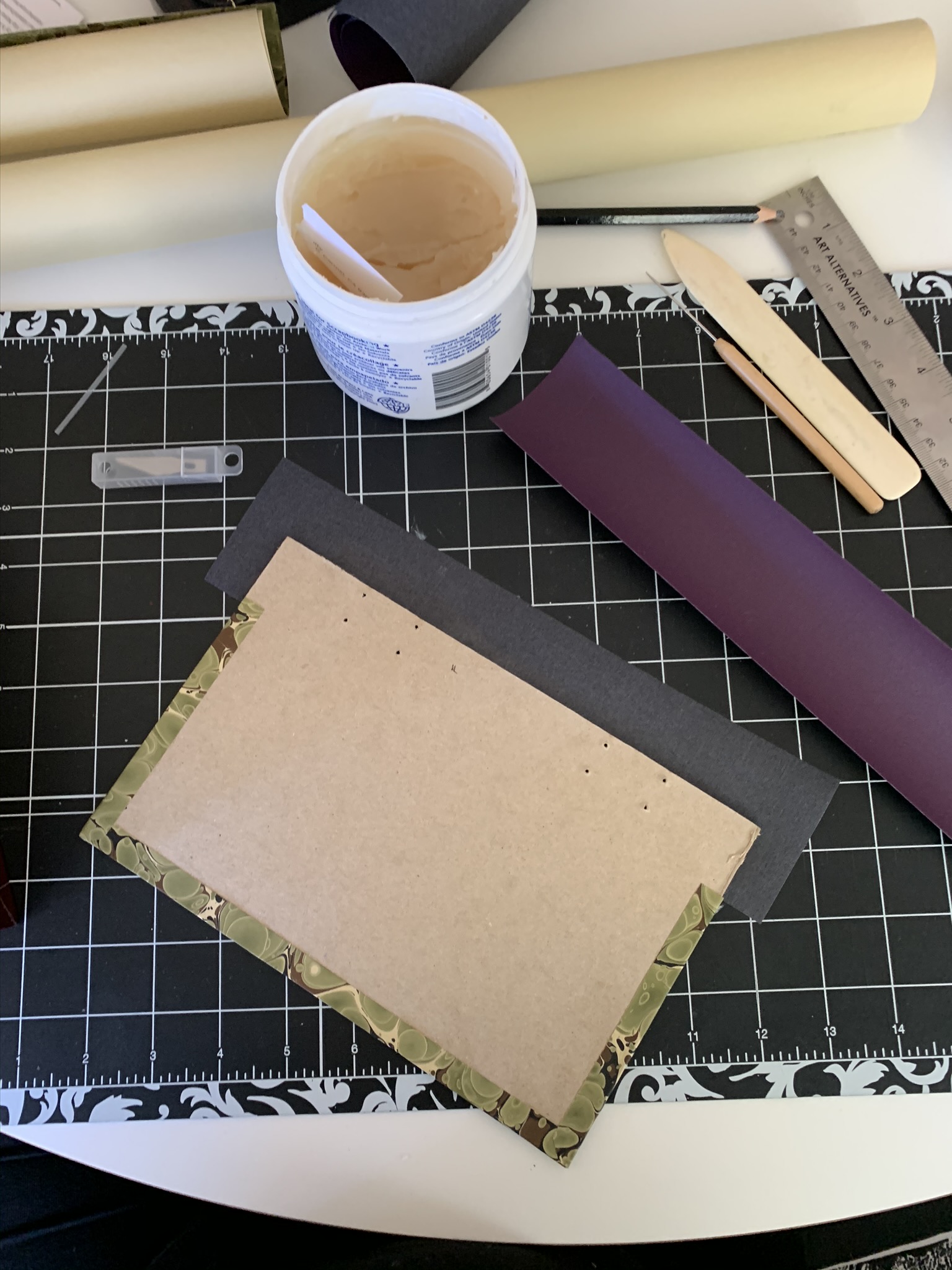 For this book I am using a book cloth along the spine edge of the cover. It is a design element that comes from more traditionally bound books with a covered spine, but here it will just be a fun design element. 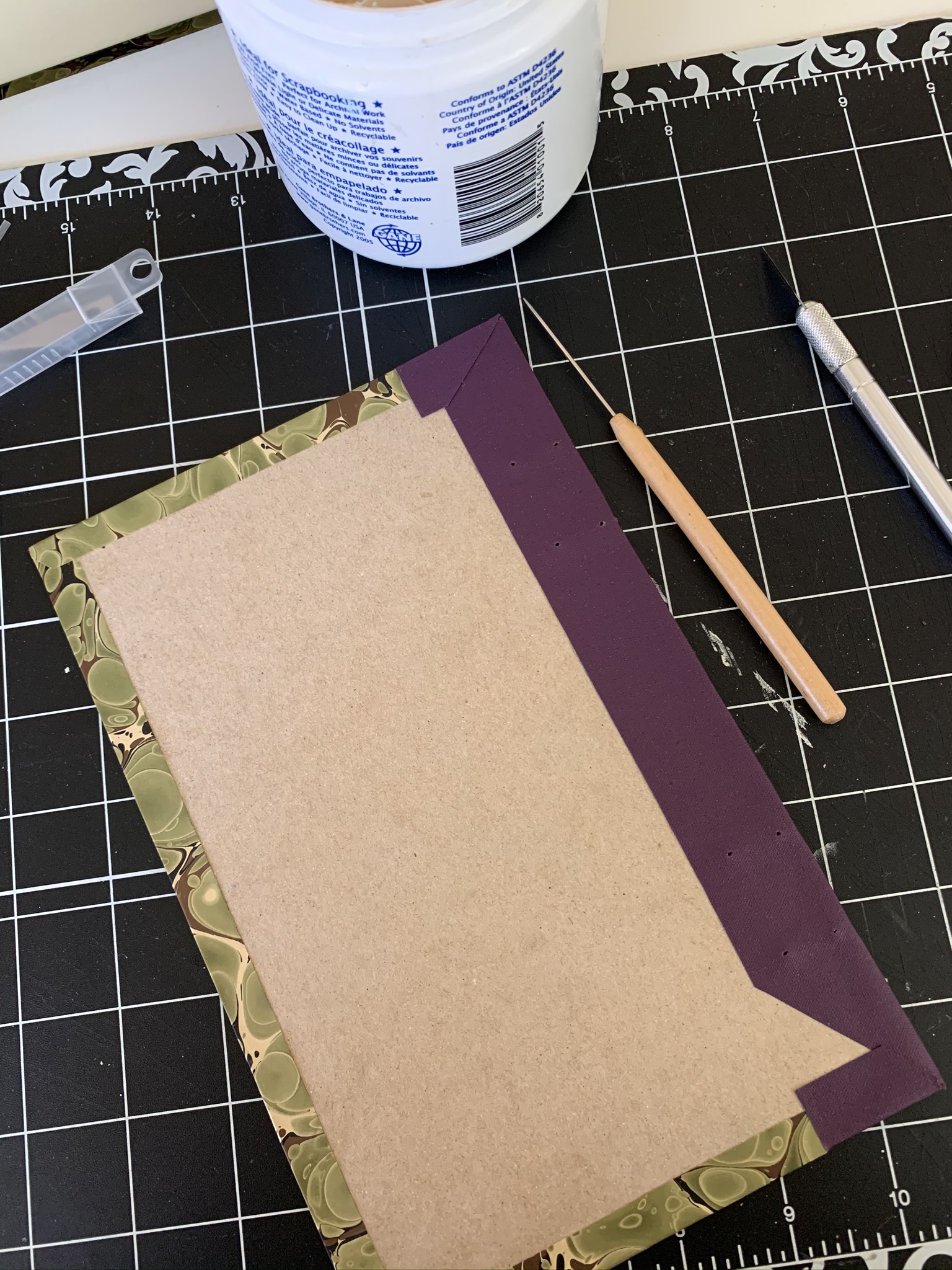 As I wrap the book cloth around the spine edge of the book I am covering the pre-punched holes. I want to make sure not to lose their location, so I am taking care to re punch them from the back each time a side is covered. 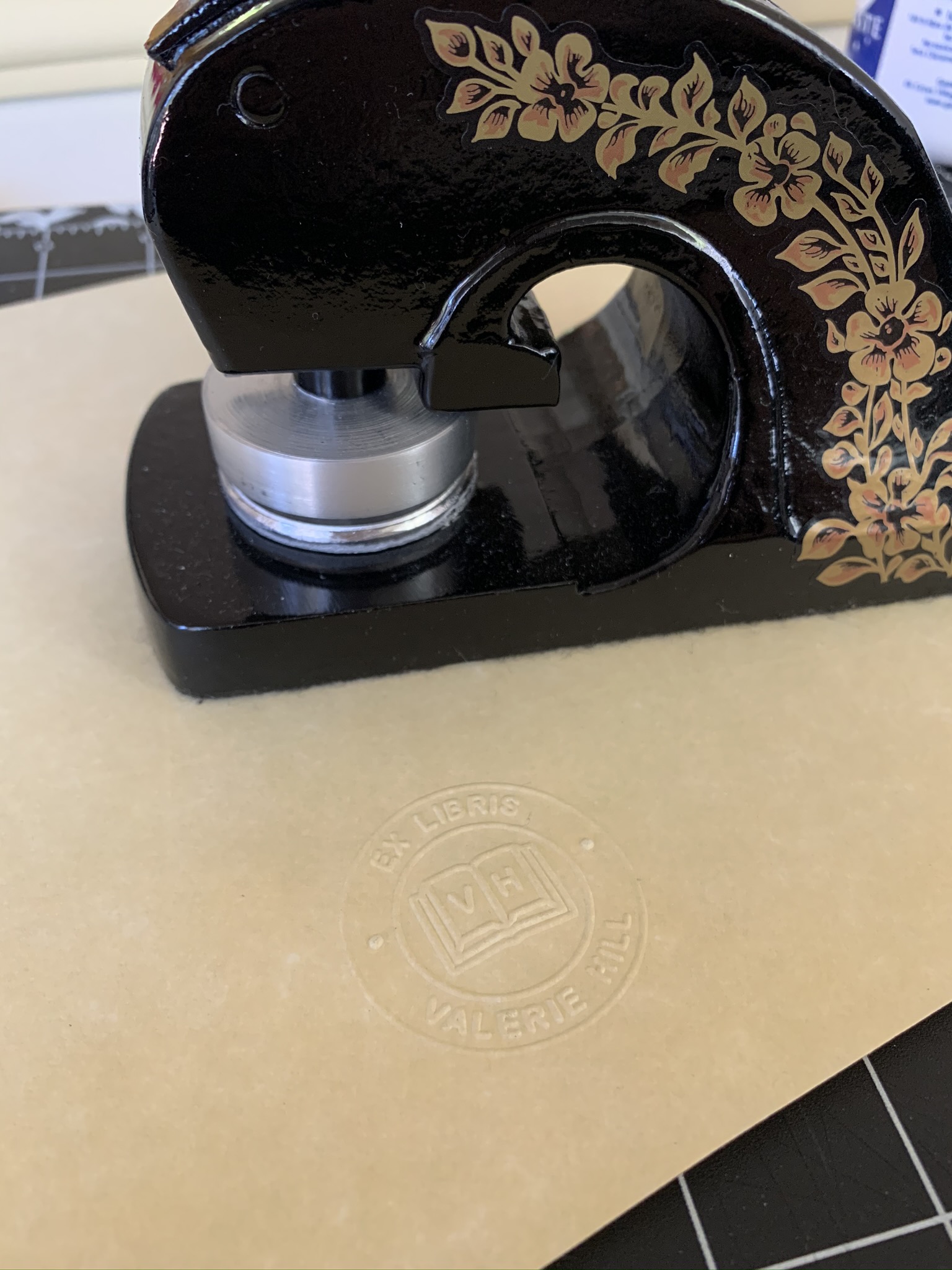 I received this beautiful custom embosser as a gift, and am excited to put it to use for the first time! 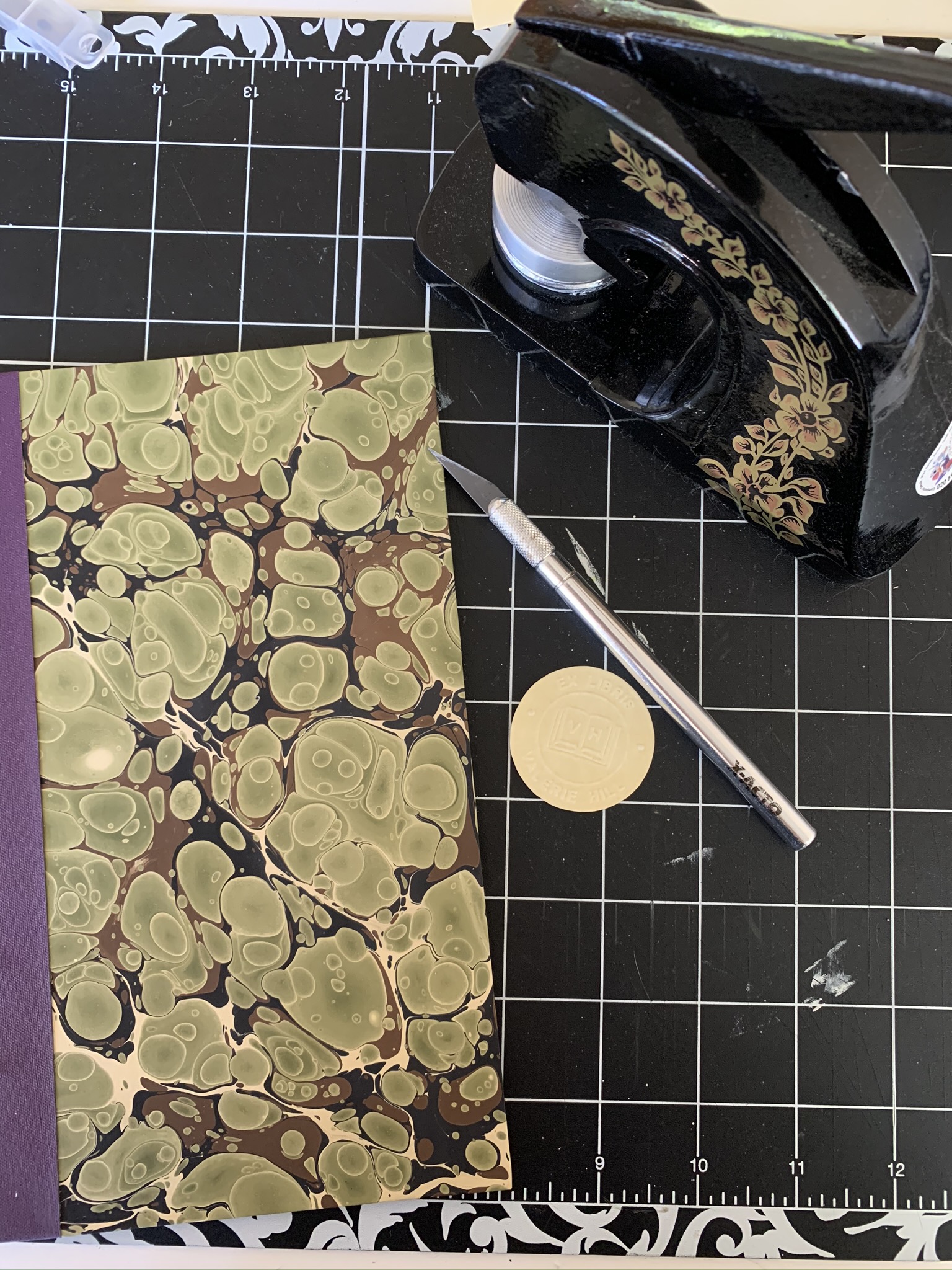 I cut out the embossed image and prepare to attach it to the cover. I couldn’t make up my mind if it should be centered on the decorative paper area, or centered on the whole cover. 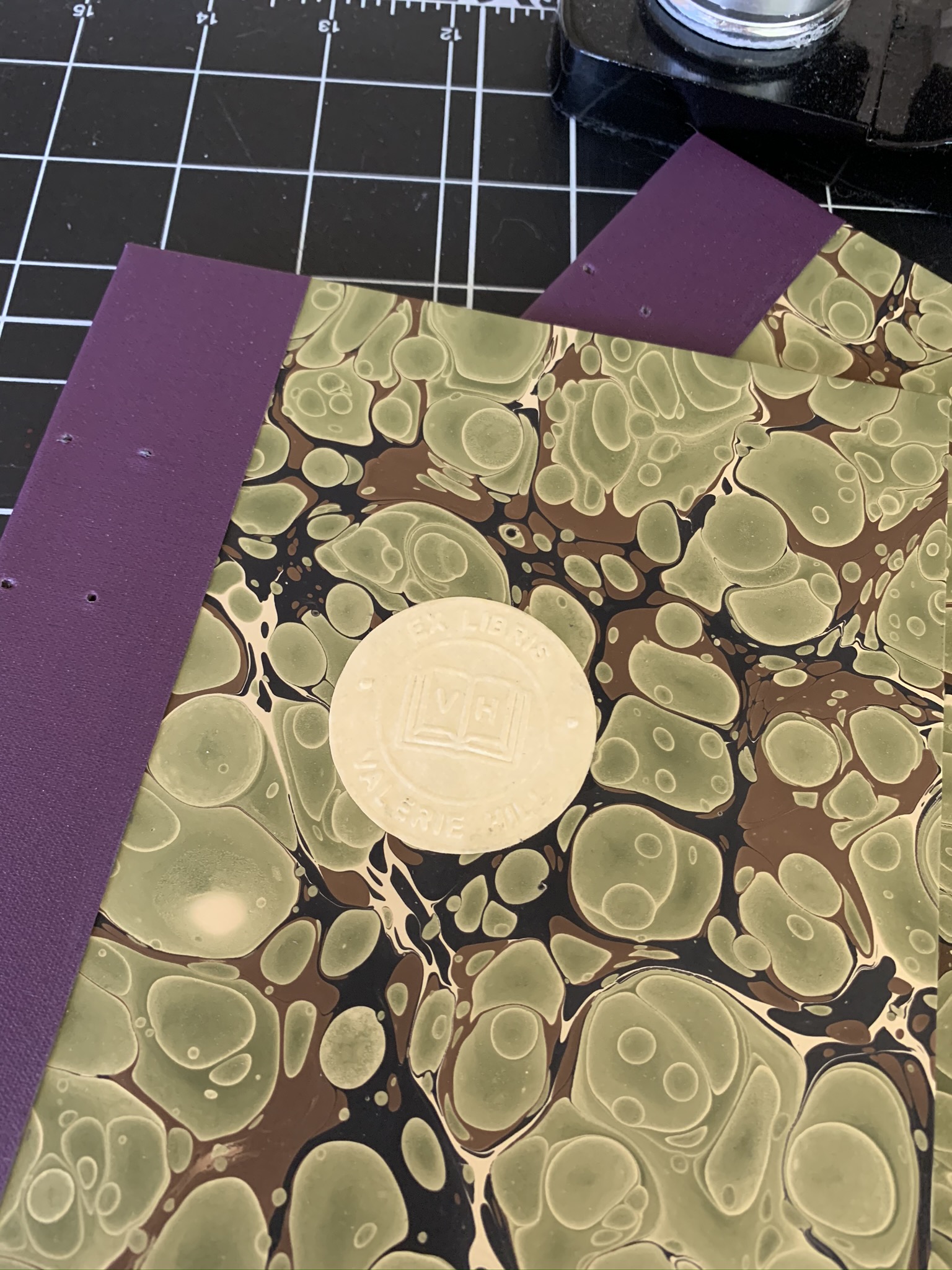 In the end I decided to center it on the middle of the overall cover. 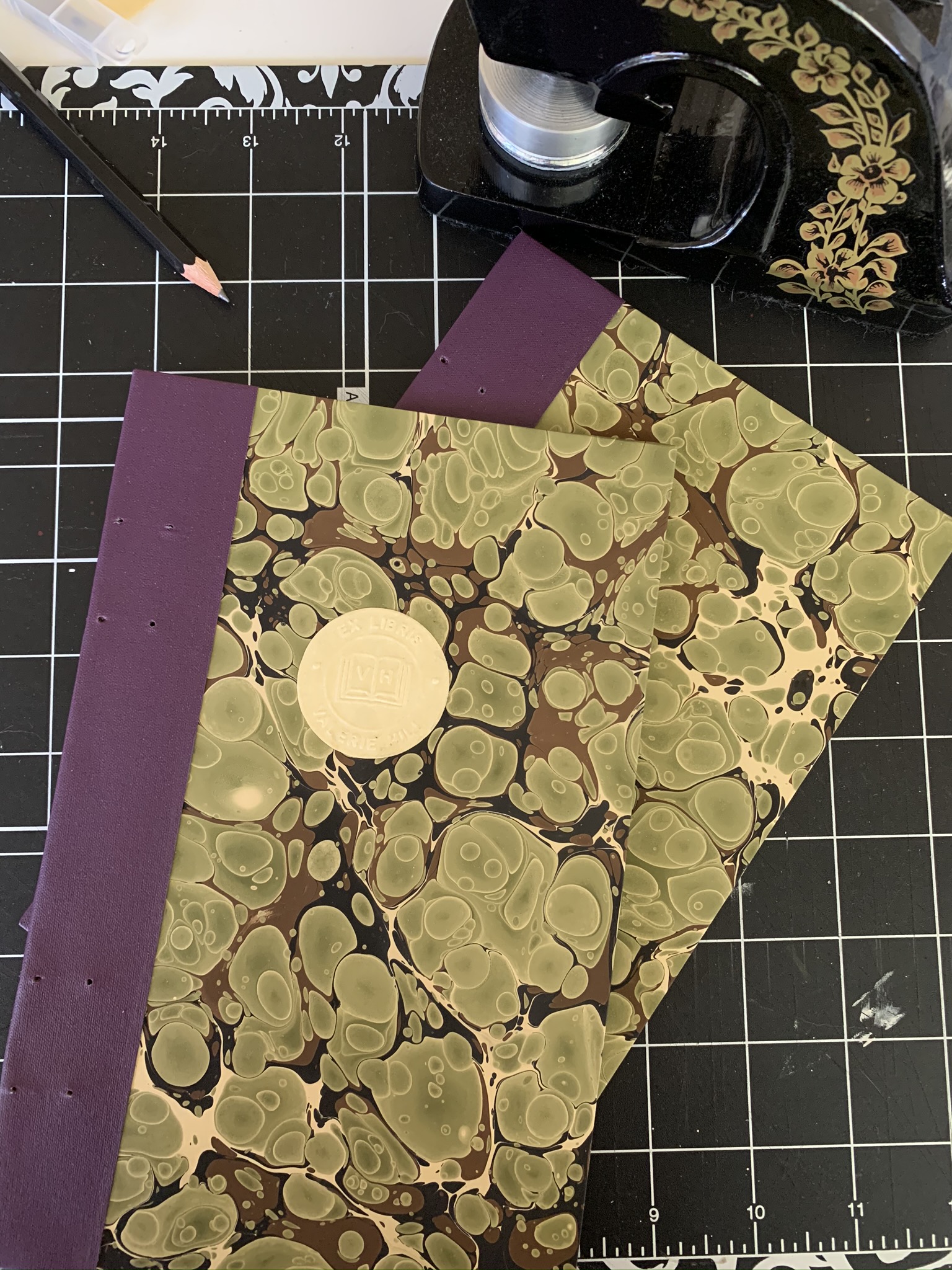 The boards are done! Next I will be binding the signatures into the book. Cant’ wait to see it come together!